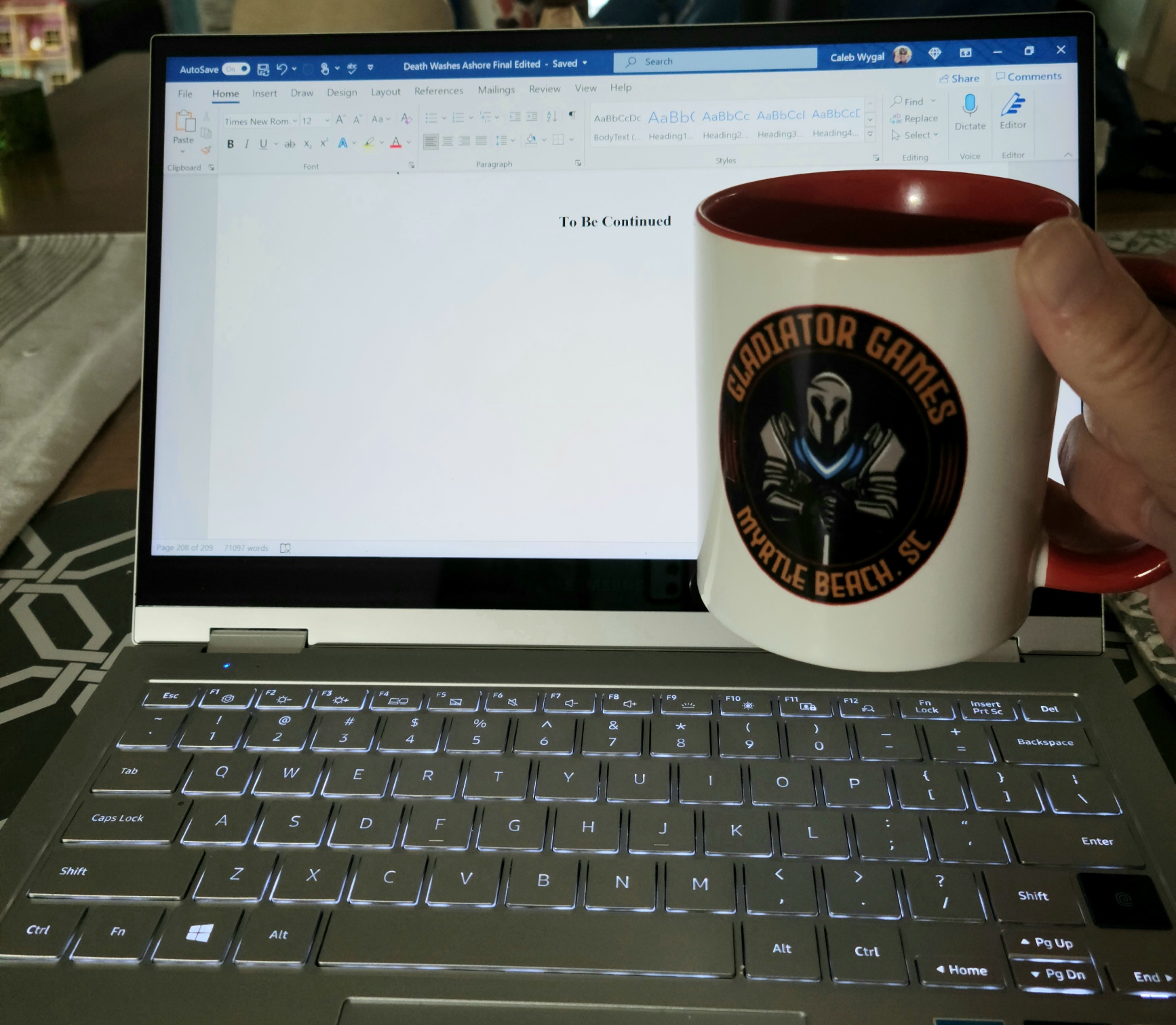 I’m celebrating this weekend and wanted to let you know that Book 2 of the Myrtle Beach Mysteries, Death Washes Ashore, is in my publisher’s hands and they have already formatted it for print!
The picture above is me celebrating “THE END” early on Thursday morning over a cup of coffee. By the way, the logo on that mug comes from Death Washes Ashore.
Myrtle Beach is known for its extravagant dinner theaters and shows, including Medieval Times and Pirates Voyage. The unfortunate victim in Death Washes Ashore is the star of a fictional dinner theater show I created for this book called ‘The Gladiator Games.’
After getting feedback about the book from my beta readers (my hand-picked inner circle of readers who pick over the 1st draft of a story to tell me everything that is right or wrong with it), I commissioned a graphic designer to create a logo for the show. What do you think?

Minutes after solving his first murder, Clark Thomas receives life-changing information about his past. But time waits for no one.

He receives a late-night message from Detective Moody soon after the body of a locally famous entertainer washes up on the Myrtle Beach shore. The department is under enormous pressure to solve the high-profile case quickly. They call upon Clark to help investigate but to do it quietly.

Clark soon learns there was more to this entertainer than met the eye. He goes behind the curtain of the popular Gladiator Games Dinner Show and meets the performers and victim’s coworkers. He learns that the entertainer with a sparkling public persona was not as squeaky clean as he appeared.

Clark lends his unique ability to tie seemingly unrelated clues together as he races to solve the case. Along the way, he learns more about his wife’s death. What he learns shatters his perception of the woman he once loved.

You can preorder Death Washes Ashore on Kindle (click here to do so), but I will let you know when preorders are available in hardcover and paperback.

I will be at the Carolina Forest Library in Myrtle Beach this Tuesday, August 24 from 11am – 2:30pm signing autographs. More details here.

Talk to you soon!